A water slide at Universal’s Volcano Bay water park in Orlando has reportedly caused more than 100 Florida tourist injuries, including one man from New York who was reportedly paralyzed last year. 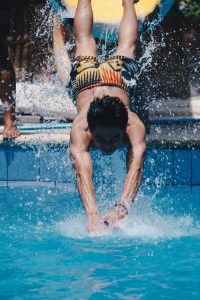 As longtime Florida tourist injury lawyers in West Palm Beach, we’re familiar with the Florida law that only requires theme parks to report ride injuries to the state when the person hurt is hospitalized for at least 24 hours. That means the actual number of injuries at theme parks are likely much higher than what’s reported to the public. Further, park visitors should know that they may have a right to monetary damages – even if their injuries didn’t meet the park’s criteria for required public reporting.

The ride in question is a series of four slides, called Punga Racers, with riders ultimately splash-landing into catch pools. According to court records and reporting by the Orlando Sentinel, the 115 injuries visitors suffered after riding the Punga Racers water slides ranged from mild to severe, and included:

Two ride safety testers were also injured. But in all of those, only one – the paralysis – was considered reportable to the state.

The man who was paralyzed has filed a lawsuit against Universal as well as the manufacturer of the slide. He alleges during a visit in July 2019, he went through a wave of water at the end of the ride, his neck violently snapped backward. For several moments, he lay face down in the catch pool, unable to move, before his wife and employees with the park rescued him. He is seeking compensatory and punitive damages in excess of $15,000. (If he wins his case, he is likely to be awarded much more than that. Compensatory damages alone in a case involving a complete spinal injury can be hundreds of thousands of dollars just in medical bills, not to mention lost wages, loss of earning potential, pain and suffering, mental and emotional anguish, loss of life enjoyment a spouse’s loss of consortium. Punitive damages, if he is allowed to pursue them per F.S. 768.72, could potentially triple the total compensation.)

His complaint alleges the injuries he sustained were “absolutely foreseeable” by the theme park because a test rider was injured in the exact same way before the ride even opened. The park decided to open the ride to the public anyway. Furthermore, internal messaging at both the park and the manufacturer involved a clear tally of Florida tourist injuries involving that slide over the course of little more than a year.

A representative for the park told reporters that this injury was essentially less than 1-in-1-million. An estimated 1.5 million visitors had used the slide since it first opened in 2017. (An estimated 1.8 million people visited the park overall last year.) The spokesperson went on to say that every injury is taken seriously, and that the paralysis prompted an investigation and review and that the corporation is “confident in the process and safety of our rides.”

Central and South Florida injury attorneys have long been critical of the fact that theme parks like Disney and Universal are effectively allowed to self-police. They handle their own inspection of rides, with potential problems not made transparent to the public. They are only required to report the most serious of injuries occurring on their grounds, which lulls the public into a false sense of ride safety.

Court records show this particular water slide at Universal was open for less than six months when it was modified to slow riders down. Internal discussions among park managers and inspectors, with the assistant director of engineering expressly stating he took exception to the slide getting passing marks for safety when it had failed some of the safety testing cycles. These included one test ride in which the mat on which riders slide bounced onto the test rider’s face and knocked his head back. He was rendered first aid and returned to work. Later, when mechanical engineers were communicating with each other about the ride’s safety, the assistant director said safety had improved but he doubted it was “where we want to be,” before noting that park operations managers were pushing to have the ride open that day.

The park opened the ride. During test rides the following year, another tester suffered a head injury, though it wasn’t serious enough to warrant hospitalization.

The ride later underwent a series of alterations to make it so that it could be a body slide, rather than one that required a mat. Additionally, riders were instructed to go feet first instead of head first.

This safety issue is the second one widely reported at the world’s seventh-busiest water park in the last year. Last summer, several guests and a few employees experienced mild shocks while in the water due to an electrical problem. None were seriously injured. The park said that issue has since been fixed.