Doctors, nurses and other healthcare providers in Florida have a professional and legal responsibility to provide care to patients according to the prevailing standard for their education, experience and position. When they fail to do so resulting in patient harm, they can be held accountable with a Florida medical malpractice claim. Verdicts and settlements are typically paid out by insurers. 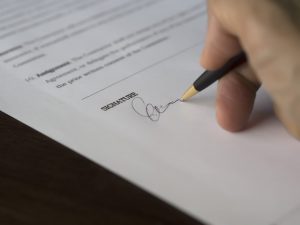 But in recent years, our West Palm Beach injury lawyers have noted a troubling trend of doctors and health care companies compelling patients to sign binding arbitration agreements before they receive care. Patients are given forms to sign away their constitutional right to have complaints of substandard care weighed in a court of law. If they decline, they are told to look for another provider.

It should be noted if you’re harmed as a result of substandard care, these agreements may not be enforceable, thanks to a 2016 Florida Supreme Court case. You should consult with an experienced medical malpractice law firm before deciding how to proceed.

This issue was recently examined by reporters at Bloomberg Businessweek. They started with an anecdote of an appellate lawyer in Jacksonville who was taken aback when her gynecologist of 14 years, someone she trusted and had safely brought both children into this world, declined to continue seeing her if she did not sign a binding arbitration form. This form, which patients were asked to sign or forego medical services, contained a waiver of the right to a jury trial in the event of medical malpractice. When the patient said she did not want to sign, the office secretary explained she could see her gynecologist once more, but then would need to find a new practice. Once in the doctor’s office for that last appointment, her physician explained it wasn’t his decision, but that his office and dozens of others was purchased by a private equity firm that owns hundreds of surgery centers and doctor’s offices across the state.

Her experience is increasingly common, but what made it especially noteworthy was that in 2016, she was part of the legal team that successfully argued for rejection of an arbitration agreement in a Florida medical malpractice claim, Hernandez v. Crespo. The form in that precedent-setting case was nearly identical to the one she was being asked to sign.

In Hernando, a woman with early labor symptoms was turned away from her doctor’s office after arriving late to an appointment. She was rescheduled for another visit four days later. A day before that rescheduled appointment, she gave birth to a stillborn baby. Typically, a patient in her position could pursue remedy for medical negligence through the state’s legal process under the Florida Medical Malpractice Act. However, she’d signed a binding arbitration agreement with her doctor’s office in which she agreed to forego jury trial rights. Her attorneys argued the agreement was unenforceable under state law because it excluded provisions of state medical malpractice law.

The Florida Supreme Court agreed the contract violated public policy because it included statutory terms only favorable to the doctors in a way that contradicts legislative intent and is clearly harmful to the public good. Further, the court held that arbitration agreements can’t change the cost that negligent health care providers should pay, limit the amount plaintiffs can recover or infringe on the fairness incentives of the state Medical Malpractice Act.

Since then, the same equity firm that bought the appellate lawyer’s doctor’s office also purchased the defendant practice in the Hernandez case – and had continued using the same form. Even if the agreement patients are signing ultimately turns out to be unenforceable, it’s likely defendants are using it as a way to dissuade potential claimants from filing a lawsuit.

Why Do Companies Advocate for Arbitration?

Arbitration is a type of alternative dispute resolution, a private process through which litigants resolve their disputes outside the court system. It’s similar to a trial in that both sides make opening statements and present evidence. However, there is no judge. Instead, it’s a privately-paid arbitrator. It’s a lot less formal, parties don’t have to follow state or federal evidence rules and, in some cases, arbitrators aren’t even required to apply the law. If the arbitrator decides the case in the plaintiff’s favor, he or she will render a legally-binding arbitration award. Binding decisions can be final, enforced by a court and appealed only under very narrow circumstances.

Those who favor arbitration say it relieves the burden imposed by pricey medical malpractice lawsuits that discourage doctors from staying in Florida. (This so-called “medical malpractice crisis” reasoning was heavily criticized by the Florida Supreme Court in the 2014 landmark case of Estate of McCall v. U.S.). Advocates say it is an affordable, sensible means of resolving disputes without the time and expense of trial and that it frees doctors to provide better care without worrying as much how a jury might later construe their actions.

Why Arbitration Agreements Are Troublesome

Our West Palm Beach injury lawyers find it telling that the rise of arbitration agreements has not only failed to reduce insurance costs (in fact, they’ve increased), it’s also been positively correlated with the rise of private equity in medicine. An analysis published last year by the Journal of the American Medical Association showed over the last 10 years, more than 4,000 women’s health clinics have been bought by private equity firms. The actual number is probably higher because that information doesn’t have to be publicly reported. These private equity firms buy in bulk practices that may be struggling and then roll them into a single network under one brand name.

Arbitration is faster and often less expensive (mostly for the defendant), but plaintiffs are less likely to win and awards when they do are likely smaller. Beyond that, the process is private. That benefits the defendant – not the patient – because it means health care providers get to sidestep the bad publicity of a negligence lawsuit. Beyond that, lawsuits are part of the public record. That means when health care providers are found liable for medical malpractice, the public can be made aware of it – and make informed choices about which doctors or practices they use.

What makes these agreements particularly concerning is that patients are preemptively compelled to sign away their rights before they can receive any care. In our view, that may well be an infringement on patient rights. In fact, both the American Bar Association and the American Arbitration Association have urged their members to avoid these type of cases.

Even doctors don’t necessarily benefit. It would be fair to say that most care about their patient relationships and their reputation – usually more so than bolstering the brand of their investor-owners. This type of arbitration agreement can bristle patients, and it also deprives doctors of the chance to clear their name publicly if they’re accused of professional wrongdoing.

It should be noted that Florida already has laws designed to block frivolous lawsuits. “Easy win” isn’t a term we’d apply to any Florida medical malpractice case. Success requires a strong claim, careful research, expert witnesses and a time investment from experienced attorneys.

An earlier investigation by Businessweek revealed that medical practices owned by private equity firms tend to be cheaper (sometimes less effective) medical supplies and hire providers not as highly-trained as doctors (physician assistants, nurse practitioners, etc.) to do work traditionally performed by a medical doctor. Then to top it off, they have arbitration agreements to limit their liability if something goes wrong.

If you have signed one of these arbitration agreements and then were affected by medical malpractice, that agreement may not be enforceable. Our South Florida injury lawyers will look carefully at your claim, the extent of your injuries and the agreement to determine the viability and value of your claim.

The Doctor Will See You Once You Sign This Binding Arbitration Agreement, Dec. 28, 2020, By Heather Perleberg, Bloomberg Businessweek