Can a Florida restaurant be liable for the dangerous condition of an adjacent sidewalk, even if the portion of pavement in question is technically owned by the city? In a pending South Florida trip-and-fall lawsuit, the answer is: Maybe. As our Palm Beach injury lawyers can explain, more than one entity can be liable for a dangerous walkway condition. Here, the final ruling is likely to come down to the level of control the restaurant had over the sidewalk. 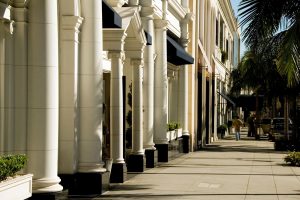 Gass v. Chops City Grill, Inc., is a case out of Naples recently weighed by Florida’s 2nd District Court of Appeals. Both the original plaintiff – a woman who was injured after tripping on a section of sidewalk – and the City of Naples, a co-defendant in the case, appealed the lower court’s summary judgment in favor of a local restaurant. The restaurant had successfully argued it had no duty of care to the woman or responsibility to maintain the sidewalk, which it didn’t own. But the appellate court reversed, finding the restaurant hadn’t met its proof burden. The case will now proceed against both defendants.

According to court records, plaintiff was with her then-boyfriend in 2015, on their way to meet another couple at a Naples restaurant. Her boyfriend dropped her off in front of a different restaurant (defendant’s) before driving away to find a parking spot. After plaintiff got out of the car, she stepped off the street and onto the sidewalk. Within a couple of steps, she fell to the ground and was hurt. She wasn’t sure the exact spot where she fell, but it was an area with pavers in front of the defendant’s restaurant. At the time she fell, she said she wasn’t paying close attention to the ground, as she was looking around at which direction she needed to go.

In her subsequent premises liability lawsuit, she initially named only the city. Later, she added the restaurant as a co-defendant. She alleged that as a business invitee to the City of Naples, the city owed her a duty of care to maintain the premises/sidewalk in a way that ensured the walkway was safe. Instead, it was defective/dangerous. The city’s failure, she asserted, amounted to negligence and was the proximate cause of her injury.

She lodged a similar complaint against the restaurant, which she said had negligently or incorrectly installed the pavers, making them unsafe, defective, and dangerous, resulting in a public tripping hazard. She further alleged the restaurant knew about this dangerous condition and failed to remedy it.

Both the city and the plaintiff appealed, arguing the restaurant didn’t meet its proof burden of establishing there was no genuine issue of material fact as to whether it could be liable for the reportedly dangerous sidewalk.

In a Florida slip-and-fall case, to obtain a summary judgment (judgment in one’s favor as a matter of law prior to the trial), a defendant has to show – unequivocally – either the absence of any negligence on its part OR that the plaintiff’s negligence was the sole cause of his/her injury. The question of whether a defendant owed a duty of care doesn’t hinge solely on whether they own the property in question. Rather, the court looks at whether the party has the ability to establish control over the property. Two or more parties may share a duty of care if they both have control of it, regardless of who actually owns it.

In this case, the lease agreement alone doesn’t resolve the question of who controlled this sidewalk, and thus who had a duty to maintain it in a reasonably safe condition. Specifically, the appellate court pointed to a provision of municipal code that allows restaurant operators to use city-owned sidewalks for outdoor dining – therefore expressly giving them control a portion of the sidewalk. On top of that, the city had pointed out that the defendant restaurant put sandwich board signage on the sidewalk and required its employees to keep the area of the sidewalk immediately adjoining the restaurant clean and free of obstructions. For these reasons, the restaurant didn’t meet its burden of proving a total absence of negligence on its part. Now, the plaintiff’s trip-and-fall claim against both parties will proceed.