Several years ago, changes to Florida’s slip-and-fall law made it more difficult for plaintiffs to win such cases. But as a recent six-figure verdict revealed, they continue to be worth pursuing, particularly when injuries are serious and your lawyer is experienced. 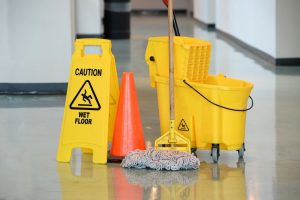 “Successful Florida slip-and-fall cases are those that involve injuries that were clearly preventable,” said West Palm Beach Injury Lawyer Ryan Fogg. “Often times, corporations will create safety rules to prevent accidents like these. But if the management and staff fails to follow through and abide by those rules, serious injuries can result, and the corporation can be held accountable.”

Florida’s slip-and-fall statute is F.S. 768.0755. It refers to “premises liability for transitory foreign substances in a business establishment.” This is just a fancy way of saying legal responsibility for a slippery substance on the floor of a business that’s open to the public. In order to prevail in these cases, one must prove the property owner/controller had either actual or constructive knowledge of the dangerous condition that caused the fall. Actual knowledge would be if the property owner created the condition or was clearly informed about its existence. Constructive knowledge can be established when the condition:

In the recent Florida slip-and-fall case out of Apopka in Orange County, the plaintiff reportedly slipped and fell in a Wal-Mart bathroom where the floors were sopping wet after an employee mopped, yet no “Wet Floor” sign was posted anywhere. According to the complaint, the plaintiff was helping her mother use the restroom in the store when she slipped, striking the back of her head on one of the bathroom stalls. Her pain was intense, but she was able to walk out of the store on her own. However, she was soon thereafter taken to the hospital via ambulance. She was diagnosed with post-concussion syndrome, cervical disc herniations, neck muscle spasms, paresthesia, radiculopathy, and sprains of the cervical spine, neck and lumbar.

No where in the vicinity of the bathroom was there a “wet floor” sign or any indication that the restroom area may be unsafe after the employee mopped. The defense team asserted that perhaps it was children splashing in the bathroom that led to the dangerous wet floor, as opposed to the employee who had mopped just a few minutes prior.

Attorneys for the plaintiff took a close look at the store’s policies and procedures. What they discovered was that the bathroom should not have been accessible to the plaintiff in the first place. There had been a cart placed in front of the bathroom door by an employee, but that gave no indication the restroom was unsafe to enter. The store’s policies require that the bathroom be clearly closed off to the public during mopping and for a time thereafter; this injury occurred minutes after the mopping. In fact, while the employee was actively mopping that restroom, more than 20 people streamed in and out.

Plaintiff was left not only with physical scars, but an inability to ride her motorcycle, ventures with her husband and father being among her most cherished weekend rituals.

She tried to settle with the store’s insurers prior to litigation and trial, but she was low-balled at every turn. It was fitting, then, that jurors awarded her 12 times the highest offer the store made. The court found that the store and the manager had failed in their duties to maintain, supervise, and operate the premises in a clean, safe condition for all business invitees. They also failed to warn customers that the area could be dangerous.

With verdicts like this, the hope is not only that justice is served to the person who’s been injured by the store’s negligence, but that this store – and others – will be more vigilant about customer safety from here out.