No one sets about their day intending to be involved in a car accident – which is why those involved often appear shell-shocked at the scene. Unfortunately when you’re not thinking clearly, it can lead to mistakes that have larger consequences. One such possibility in Broward car accident cases is accepting money on-the-spot from the at-fault driver. 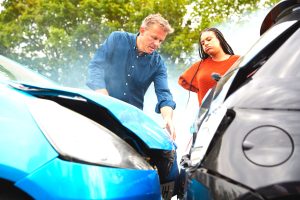 There are many reasons why this is bad idea.

Our South Florida personal injury lawyers understand it can be tempting, especially if you don’t think you’re hurt badly and your car seems mostly fine. But it’s important to think about why someone would offer you cash or try to arrange for private payment on-the-spot. There are several possibilities – none of them beneficial to the injured or wronged party.

Why Would a Driver At-Fault Offer Cash at a Broward Car Accident Scene?

If someone offers you cash at a crash scene, that should immediately raise some red flags. To be fair, there is nothing illegal about a driver offering you a cash settlement right away, but it’s highly suspicious.

Among the reasons a negligent driver might be eager to settle matters immediately:

Risks You Run Accepting Cash at a Florida Crash Scene

There are numerous reasons why it’s unwise to accept cash from the other driver at the crash scene – particularly if you’re doing so in exchange for not involving police or insurers.

Let’s start with the fact that per F.S. 316.065, if you’re involved in a Florida car accident, you’re required to immediately contact police to report any crash that involves:

If you do not report a crash that meets these criteria, it’s penalized as a non-criminal infraction. But the bigger concern is what it could mean for you financially.

Florida is a no-fault state for car accidents. This means that basically every driver (motorcyclists excluded) must have personal injury protection coverage that provides up to $10,000 in damages (medical bills, lost wages, etc.) to their own insureds – regardless of who is at-fault for the collision. It’s only when someone is seriously injured per F.S. 627.737 that they’re allowed to step outside that no-fault system and pursue legal action against the at-fault driver. But if you don’t properly report the crash or obtain the other driver’s information, your own PIP insurer is likely to give you a tough time. Reporting the crash and filing an insurance claim is about punishing the at-fault driver than it is ensuring you are fairly compensated.

This same principle is true for vehicle damage. Crash-related damages aren’t always immediately visible, and you won’t know for sure until you’ve had a mechanic conduct a thorough check. Even if you notice damage and conclude it’s not that bad, it may end up being more expensive than you realize. If you accept a few hundred bucks from the other driver in exchange for not reporting the crash – only to find out later the cost is going to be well over $1,000 – guess who is stuck holding the bill for that?

The bottom line is that even if the crash is relatively minor, going about properly reporting it and filing a claim protects your best interests.