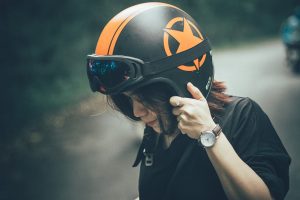 Although injuries aren’t gender discriminate, depending far more on the specifics of the crash (type of bike, type of collision, speed at impact, helmet use, etc.), there are some injury patterns that tend to be more common among female motorcycle operators.  A 2017 study in the gender differences in motorcycle-related injuries published in Biomedical Journal revealed female motorcycle accident victims sustained much higher rates of injuries to extremities, while suffering lower rates of injuries to the neck, head, face and thorax than male motorcyclists. The severity of female riders’ injuries was also lower on the whole, with fewer female motorcycle operators landing in the intensive care unit (ICU), or when they did, having stays that were substantially shorter than men.

When women were passengers (mostly with male operators) they faced greater risk of injury – often the same levels as the male motorcycle operators, even as they retained less control of the bikes. From 1996 to 2007, women motorcycle passenger injuries accounted for 90 percent of overall injuries to women on motorcycles, according to the National Center for Statistical Analysis. That figure as shifting as women become increasingly in control of the bikes themselves.

The Insurance Institute for Highway Safety reported in 2016 that women accounted for 9 percent of total motorcycle accident deaths, but 68 percent of all motorcycle passenger deaths.

Riding with a passenger requires significantly more skill than simply riding alone, which is why the National Highway Traffic Safety Administration recommends holding off on doing so until one has taken a safety course and also has enough solo ride time under their belt to take on the responsibility of carrying a passenger. (Passengers who are impaired or a distraction can influence the odds that a motorcycle operator will wreck.) The NHTSA suggests that motorcycle passengers play a much larger safety role than they are typically credited, often influencing critical decisions such as helmet use and speed choice. Analysis showed that with a passenger aboard, motorcycle riders wore a helmet nearly 60 percent of the time. However, when the passenger didn’t wear a helmet, riders only wore them 5 percent of the time.

Whether you are a motorcycle operator or passenger, injury or wrongful death in a motorcycle crash may entitle victims to compensation through a number of legal avenues. As long-time West Palm Beach motorcycle accident attorneys, we can offer information on insurance claims and more.

Nearly Twice as Many Women Are Riding Motorcycles Compared to a Decade Ago. Dec. 4, 2018, By Eric Brandt, The Drive