Every year, more than 200,000 child playground injuries nationally prompt a trip to a hospital emergency room, according to the U.S. Centers for Disease Control and Prevention. Three-fourths of these occur on public playgrounds (schools and parks), and nearly 60 percent involve broken bones, contusions and abrasions. More than 20,000 are treated for traumatic brain injuries. Falls account for 70 percent of playground injuries. Slides and swings account for most injuries among children under 4, while climbing equipment is involved with most kids 5 to 14. Parents may be tempted to chalk up the incident to “just an accident,” but West Palm Beach injury attorneys know many times, these injuries occur because someone was negligent. 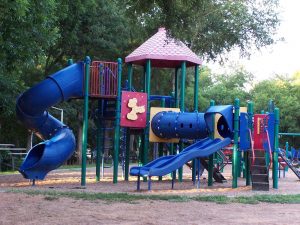 When it comes to liability, our personal injury lawyers will look at the incident from all angles. Manufacturers and distributors can be liable when playground equipment is defectively designed or put together. Property owners can be held legally responsible if they failed to maintain the equipment as specified by the manufacturer. Schools, daycares and caregivers can sometimes be held to account when there is evidence of failure to adequately supervise (as accounts for 45 percent of playground injuries, according to the American Trauma Society).

In 2016, Florida legislators proposed Senate Bill 406, the Playground Safety Act, which called for requiring certain new and existing playgrounds to comply with specified safety standards and guidelines and authorized counties and cities to require playground permits and charge fees for the construction or renovation of certain playgrounds. Unfortunately, the measure died in committee. West Palm Beach injury attorneys can still refer to the fact that Florida public schools are guided by the State Requirement for Educational Facilities (SREF), provisions of which require separate kindergarten playgrounds and mandate all playgrounds and equipment comply with the U.S. Consumer Product Safety Commission’s Handbook for Public Playground Safety, which outlines ASTM specifications for just about every type of playground equipment imaginable. Playgrounds that don’t meet these guidelines can be dangerous.

Recently in California, a jury awarded $20 million in damages to a 15-year-old who suffered traumatic brain injury (among others) when he stopped at a homeowners’ association playground to sit on a swing and send a text. The San Diego Union Tribune reports that in Thompson v. Lamplight Village, the crossbar of the swing set had corroded and worn badly at the points of connection. When he sat, the 42-pound crossbar fell on his head. It was the fourth time the HOA had known about the swing set failing. The HOA reportedly thought the equipment was new enough – 3-years-old – it didn’t require regular inspection or maintenance. Half the damage award was in punitive damages, the intent of which is to penalize egregious wrongdoing. It’s not clear how much of that plaintiff will collect, as the HOA liability insurance policy is only for $2 million. The homeowners would be responsible for the rest, about $80,000 per household. Lack of regular inspections of playground equipment – even without incidents of injury – could itself be considered negligence.

Playground injuries are preventable. Take a few minutes that next time your child is at the playground (or take a moment the next time you’re at your child’s school) and see if there are any clear standards violations that warrant immediate attention. Inform the school, city, HOA or other property owner of the issue. If your child is injured in a Palm Beach playground accident, contact our injury lawyers as soon as possible.

Protect the Ones You Love: Child Injuries are Preventable, Playground Safety, CDC